Some Photos from the Wrestling Tounament I Covered last Saturday 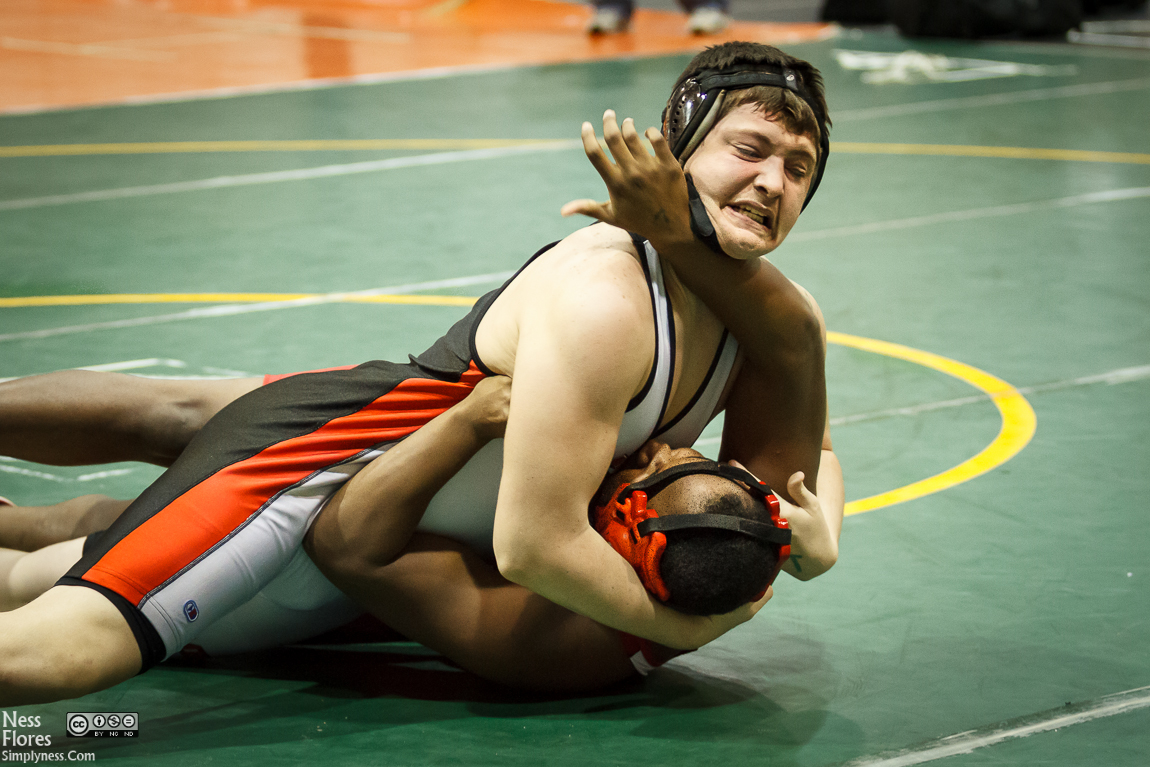 One of the photos from last Saturday's Wrestling Tournament, There were four big mats that filled the entire basketball court, four matches at the same time.
It was my second time to shoot wrestling, the first one was a month ago when I shot a two hour match. Last Saturday was a grueling 6 hours 10-Way Tournament that started at exactly 9am and ended at 3pm.  Athletes from Ridgeview, Middleburg, Fleming Island, Atlantic Coast, Nease, St. Augustine, Florida School for Deaf and Blind, Eastside High (Gainesville), Bucholz (Gainesville) and Orange Park competed in the tournament with Fleming Island ending on Top position. Being able to shoot the tournament was a great learning experience for me, and I'm looking forward to shooting more wrestling matches if time allows.
During the game I shot with my Canon 7D and the 70-200mm F/2.8L USM and the Canon 60d with 85mm F/1.8 USM as my second body, I also use the Canon 580 EX Speedlite for fill in flash. The light in the gym isn't all that bad, I was able to shoot 1/320 1/500 shutter speed @ F/2.8 with a high iso of 1600 – 2500.

I also tested my Panasonic Lumix G3 with the Panasonic 45-200mm, but I was mainly dissapointed with the 45-200mm. At 200mm it was soft, at 150mm I would say that it was ok. A better glass with a fast 2.8 aperture with cerntainly do the trick. I also tested the video from the G3 and shot one match. please see below:
[youtube]https://www.youtube.com/watch?v=dv3LYuUH4M4[/youtube]
Here's another video I shot with the Canon 60d with 85mm F/1.8
[youtube]https://www.youtube.com/watch?v=_49bzJcyRlE[/youtube]
Sorry:
- Please recheck your ID(s).
- If you are showing a private album, check that the "Retrieve Photos From" option is set to "User's Private Album" and that the Authorization Key is correct.